ST. GEORGE – The sights and sounds of planes flying in the skies above St. George is nothing new. However, in February of 2011, local residents were treated to something new – the roar of a MiG 15 soaring overhead.  While the sight of a Soviet-produced jet fighter over a US city has nowhere near the same impact now that it would have had 60 years ago, it is nonetheless an amazing piece of wild-blue-yonder history.

The MiG 15 – a jet fighter largely used during the Korean War – that flew over the city belongs to the Western Sky Aviation Warbird Museum. While its current non-flyable brethren – another MiG 15, a MiG 17, and a British Jet Provost – were relocated to the new airport by a tow, this one took to the skies for the journey.

What’s that? Some people have never even heard of the Western Sky Aviation Warbird Museum?

“I hear that a lot,” said Rich Grinnel, the museum’s public relations coordinator. He’s hoping that the public’s current lack of knowledge concerning the museum’s existence will be remedied with its upcoming grand reopening on May 20-21 of this year.

The Warbird Museum will be celebrating its first anniversary in conjunction with the Classic Jet Aircraft Association’s (CJAA) forth annual Jet Blast. The Jet Blast itself is not an air show, but a training event. Still, attendees will be able to watch classic aircraft fly at the new airport. Among the aircraft involved in the celebration will be a P-51 Mustang and T-33 Shooting Star. The event will also be paying homage to the past, present and future members of the US armed forces.  Additional events at the Warbird museum will include aircraft displays, veterans’ booths, memorabilia, a silent auction, and a special treat: two World War 2 fighter aces signing autographs.

Grinnel added that individuals who make donations of $300 to the museum before May 18 will be able to take a ride on a T-6 Texan plane. After that, a donation of $350 will be asked for in exchange for a flight in the T-6. Potential flyers must be 18 or older.

Founded by Jack Hunter, retired US Air Force colonel, the Western Sky Aviation Warbird Museum is a non-profit organization dedicated to the preservation and restoration of historic aircraft. It also exists to help educate the public about war aviation history and the sacrifices made by the brave souls that flew in defense of freedom.

On Friday and Saturday, May 20 and 21, from 9 a.m. to 5 p.m., head out to the new St. George Municipal Airport and take in the sights of sounds of historic planes and the stories behind them. 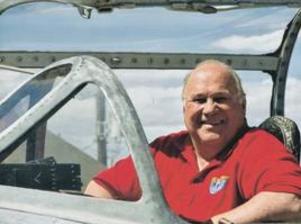 To teach Southern Utahns about aviation in past wars he needed the real thing — genuine aircraft that saw flight during conflicts like the Korean War and could still zoom through the air like it’s 1952. And when his museum opens on May 22 he’ll have just that.

There’s no other place in the state of Utah that has this,” he said of his functional, historic air planes. “We’ve got something tangible they can see.”

Located at the St. George Regional Airport, the museum will show case aircraft from around the world, some of which actually saw combat.

Though he works part-time for SkyWest Airlines as a flight safety manager, Hunter said he started the non-profit company, Western Sky Aviation, in his spare time to gather items to display in a museum setting. Since receiving his first plane from a dying friend more than two years ago, Hunter gathered aircraft from people all over the Southwestern United States. And after another friend donated the use of a building at the old airport, his dreams of a warbird museum finally began to take shape. "

We've put in a lot of sweat and work," he said of his seven-person crew. "We've just got to get this opened." Constantly looking for people willing to donate time, money and artifacts, Hunter said he envisions the museum emerging as an wartime education center for Southern Utah.

He hopes it will be a place where young people can come to experience first-hand the wartime events that shaped the world they live in. "We've got so many pilots who live around here," he said of St. George's retired military population. "We would certainly like to have events to listen to these people who can share their experiences."

Ron Edwards, the museum's restoration director, said there's still a lot of work to be done before things reach that point. With only seven people working with the organization, he said it still needs volunteers and financial assistance. "It's been a group effort getting everything going," he said.

Public Relations Officer, Rich Grinnell, added the aircraft have flown in air shows, but will need a lot more financial support before the museum will be able to get them in the air. Some of the planes cost nearly $1,000 an hour in fuel to fly. "We want to expand and not to be sitting idle," he said. "But that takes money."